Go Go round this world(cultural news) 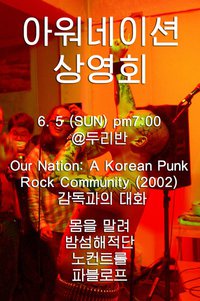 The 1990s were a period of continued growth and change for the Republic of Korea. The election of the nation's first civilian president, greater economic purchasing power, increased exposure to outside influences, and a rapidly globalizing world all facilitated the rise of new youth subcultures. In 1994, near Hongik University ...in Seoul, a club by the name Drug opened. Soon it began featuring bands playing underground rock music: alternative, grunge and punk. In 1996, the Drug label put out its first CD: Our Nation featuring two young bands, Crying Nut and Yellow Kitchen. By 1999, the fans and bands had made Drug into a place of their own. With it and other clubs like it, punk had truly come to South Korea. This is the story of some of the people who made Drug what it was back in its earlier days.

Note from Stephen, just so people have a better idea what to expect:
The title does come from the "Our Nation" series on the Drug label, but I'm afraid Yellow Kitchen isn't involved at all, although about a third of the doc focuses on Crying Nut. Basically we were trying to capture the state of the scene at Drug in 1999, when it had already seen a bit of success and was attracting more fans than just people for whom punk/alternative was the central part of their identity. People who show up in the doc include some of the guys from 18Cruk, Lazybone, The Goonies (briefly) and longer interviews with some fans, 아쩌씨, Supermarket and CN.....But it'd be great to have as many people from the old days show up as possible, no matter what your connection to Drug.